Saturday  the 10th of October, Avondale.

After a long drawn out ‘summer’ league campaign which gave us a mixed bag of fixtures let alone results (travelling as far as Carnew on a wet miserable night to travelling on a glorious sun-kissed evening to Kilcoole), everyone was glad the league campaign came to a close! This tight knit small squad fulfilled fixtures and gave an account of themselves every time they took to the pitch with many young lads fulfilling unfamiliar positions when they were needed. These opportunities were grasped by some players to nail down positions throughout the league and make it their own, with great displays given, none moreso than our consistent full back line of Matthew, Jake and Eoin expertly assisted by Dylan in goal, gave us a foundation to build upon. In front of them we had energetic and strong ball carriers in Joe, Mikey and Dan. Our midfield players John and Shane were full of graft and endeavour alongside the guile and work rate of our half forwards, Gavin, Rory, Jack, and Ciaran which all led to a very strong attacking force of Niall, Greg, Conor and Oisin.

When the championship draw was made we were pitted with 5 other teams, Rathnew, St.Kevins (Hollywood), Derry Gaels (Aughrim), Kilcoole and Ashford, now with a settled squad we were buoyed with optimism. The group games were fantastically poised and made for entertaining viewing, for all who attended, however it was heart in the mouth stuff at times with only a kick of ball separating us and our opponents in all our games.  After all the results in the group phase were completed, we found ourselves in the Shield Final V Derry Gaels.

We took to the pitch in Avondale, letting the lads relax into the occasion and take note of the swell of a crowd developing. Once, we called them together and Liam Cullen went through their warm-up (in the absence of Brendan Lawlor who was out of the country) and then took them through his football drills, their mind and mentality was purely focused on the match. We had played Derry Gaels before in the group phase and lost to them by a point earlier in the campaign so we knew it was a game that was more than in our grasp to win. We went back in to name the team and make sure everyone (subs and all) were fixed on what they had to do to enable a victory, the ability was there in abundance within the dressing room, it was now up to them to belief in it and deliver it for themselves!

When the ball was thrown-in , the whole team from 1-15 tore into the opposition, with quick paced-balls and winning their individual duals we started to forge ahead. We established a lead at half time but knew that Derry Gaels had more to offer and knew that we had to make sure we kept the pace up in the second half to finish as deserved champions, as our display and possession was dominant. However, they got a purple patch and harvested two quick goal s that levelled up the match but the spirit of this team was to the fore and for the remaining 8 minutes of the game we kept them out of our half and sealed the victory.

It was fantastic as coaches to see how talented this young bunch of lads are when they started playing, however it was a testament of their character how much they battled and dug in when the match was on a knifes edge but it was their respect and graciousness to acknowledge the display of their opponents at the final whistle that topped of a victory that will hopefully live long in the memory and build the success of the future. 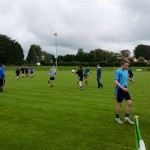 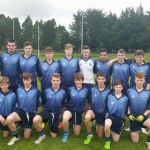 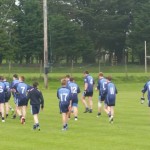